Catch Of The Month

On The Water…with Captain Alan

What an awesome week of fishing as anglers aboard the Magic enjoyed non-stop action catching trout, Spanish mackerel, bluefish and pompano.  Drifting live shrimp over grass flats and in the mouth of New Pass was the secret to our success – and the payoff was several days of triple digit numbers of fish brought boat-side.  At times the bite was so fast and furious it became impossible to keep an accurate count of how many fish we actually caught.  I’ll take that kind of a problem anytime!

My catch-of-the-week photo is this nice trout.  You can tell from their smiles that that these two kids had great time! 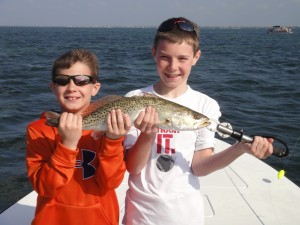 Prev Next
Book a Trip

I had so much fun on the water and can’t believe I caught that many fish. Thanks for making it such a fantastic day. I can’t wait ‘til the next time I visit Florida and get to go fishing again. I’ll see you then.